Credit for this recipe goes to Mum who used to cook shredded cabbage with black pepper and eggs. I've blogged before about Grated Cabbage that is similar to this. Adding the shrimp powder (entirely optional) adds a lovely Burmese touch to this dish.

Chayote Squash is called Gurkha Thee in Burmese, probably because they were introduced to the Burmese people by Gurkha soldiers.

This squash acts as a tenderizer for all kinds of meat and is a popular vegetable that grows profusely in the higher altitudes of the Himalayan mountains. The Nepalese call it Eskuus or Darjeeling Squash. We grew up eating this squash which was usually cooked with meat.

I'd forgotten about it until a friend from Texas showed me around her vegetable patch. She had it growing in the ground but suggested growing it in a container because it spreads out of control. Apparently, a green thumb is not necessary to grow chayote squash. All one has to do is bury the whole fruit in a container of soil and water on a regular basis. Each plant produces several squash and the tender greens are delicious in their own right.

Serve this as a main dish with steamed rice as part of your Burmese meal.

Directions:
Serve with steamed Basmati or other long-grain rice.

Posted by Chumkie at 8:41 PM No comments: 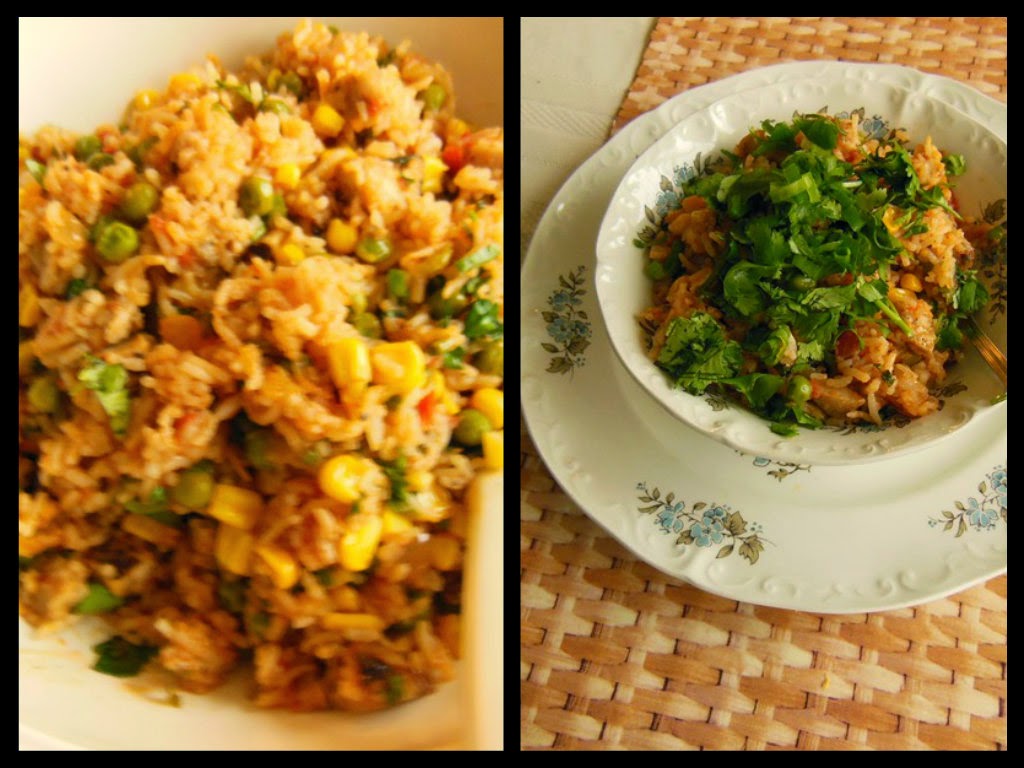 Coming up with something new, interesting and tasty for our Tuesdate night with a GrandBoy is always a challenge. Spanish rice with chicken came to mind because the boys seem to enjoy eating at Taco Bell. Served with sliced cucumbers and shredded lettuce, the fried rice can be rolled up in soft, flour tortillas and eaten like a burrito. Hope Kole likes his dinner tonight.

This deconstruction of a chicken fajita meal combines all its ingredients into a hot & bubbling casserole. I had to come up with something quick that would also appeal to our grandsons (6-8 year-olds) and this met the criteria, especially because we had chicken fajita strips in the freezer. The young boys and their grandparents enjoyed scooping it up with Doritos and heated flour tortillas.

DIRECTIONS
I shared this on:

This same fennel seed sauce was borrowed from a previous post that used Climbing Perch or Koi Maach. Baby catfish is considered to be nutritious, especially if the fish is sold live in the fish market. The fish monger willingly guts and cleans the little fish after weighing them. In the West, fish consumed by Bengalis is available in Bangladeshi markets and fish, like tyangra, come frozen in slabs of ice. They can be defrosted by placing the package on a plate in the refrigerator overnight. If need be, should the block still be frozen the next day, it can be placed in a sink filled with water to thaw.

The key ingredient in this dessert dish is toasted vermicelli, also known as sewai or semiya. Payesh is thickened & sweetened whole milk that is simmered down to half its original volume. The resulting sweet cream blends with the vermicelli to create a wonderful dessert. To save time, I've substituted the sweet cream with a package of Gits Kulfi Mix and was pleasantly surprised at how well it worked in this dessert. 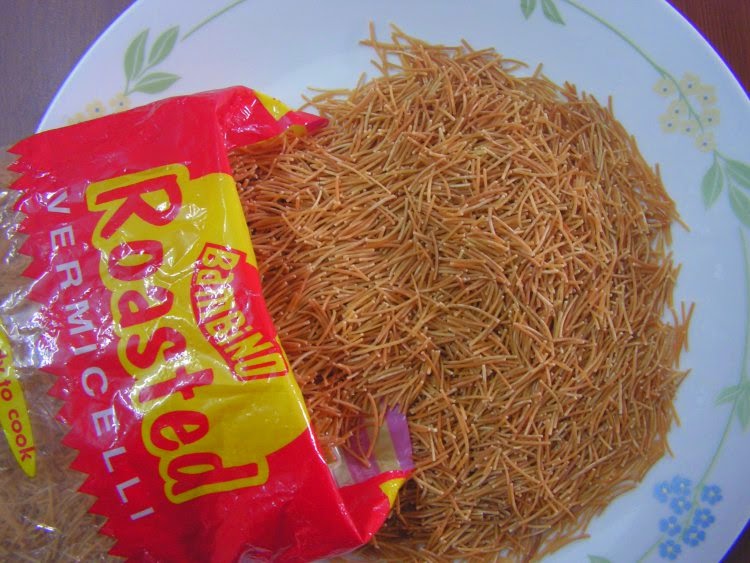 Vermicelli is very skinny pasta that is available in Indian markets already toasted to a golden brown color. It also comes untoasted, but it's really easy to stir-fry in a dry skillet until golden brown. Toasting vermicelli in melted butter ensures that each strand remains separate and prevents it from becoming mushy.


It takes a ratio of 2:1 cups of liquid to vermicelli to cook till soft. This is a dry version of the payesh, but Bengalis generally prefer more of a saucy consistency to their sewai payesh.

The people of Bengal in India are very fond of eggplant. The big & round eggplant are the most common variety found in India. The long & thin oriental eggplant are, in my opinion, sweeter and have less seeds. Cut down the center vertically and then cut into four pieces, they are tossed with turmeric and salt and left to rest for 10 minutes before pan-frying. Covering the skillet while they fry allows steam to collect in the pan which cooks the eggplant faster without using much oil. I find that oriental eggplants use less oil to brown than the round varieties.

Begun bhaja is had as part of a daily meal as well as a starter for a festive meal. It's quick & easy to prepare and should be pan-fried just before the meal is served.

Baked rosogollas are a relatively recent phenomenon in the Bengali sweet shops or misti dokan of Kolkata (formerly Calcutta). I started with the rosogolla payesh recipe recently posted and placed one serving under the broiler until the tops caramelized. 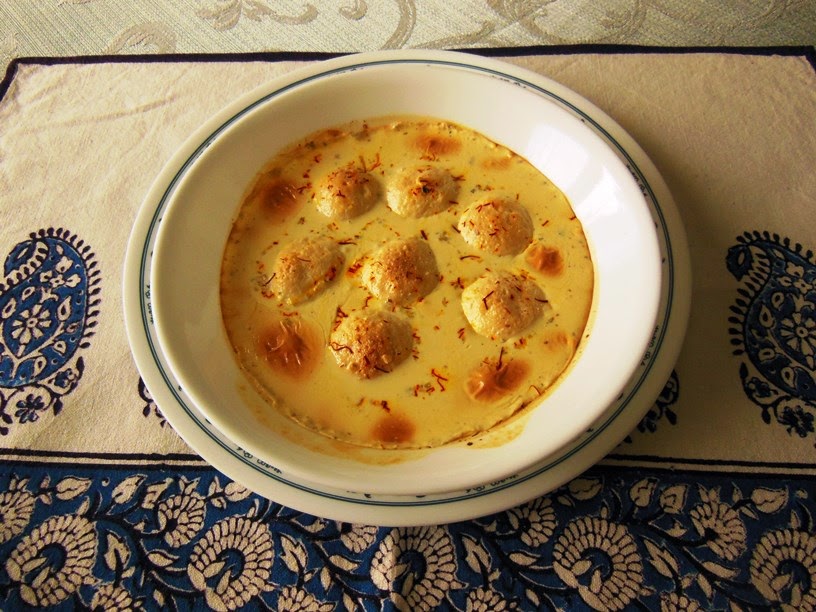 Since Hubby enjoyed this small transformation thoroughly, I decided to bake the remaining payesh at 350F degrees and sprinkled some saffron over top. Either way, finishing off this sweet dish in the oven imparts a caramelized & smoky flavour to these delectable fresh cottage cheese dumplings.

This lamb dish brings back memories of our days in Darjeeling (nestled in the Himalayan mountains in India) during Bijoya Dashami, the tenth day of Durga Puja. All Puja festivals are celebrated by offering food, usually vegetarian food, to Hindu deities and sharing that blessed meal with family and friends. Bijoya is a little different in that it is one of those rare occasions when non-vegetarian food is served to family and friends.

Mum always cooked all festive meals herself. Daily meals were prepared by the kanchi (Nepali word for household help) because Mum worked as a professor at an all-girls' college. On weekends and holidays, she enjoyed cooking for us all and for any of her own and/or our friends who dropped by. On Bijoya Dashami she'd prepare this type of lamb/goat curry served with luchis (Bengali deep-fried white puffed bread).

Today is Bijoya Dashami and we had friends over for lunch. I made Kosha Mangsho the way I imagined Mum would have made it. It was served with steamed Basmati rice because I'd need the patience of Mum to make luchis.


This Bengali dessert is delicious and requires just a few ingredients!  It consists of fresh cottage cheese dumplings that are soaked overnight in sweetened cream. Canned rosogollas are available in most Indian markets in North America. Using these pre-made rosogollas saves a great deal of time.