Biryani is a delicious and wholesome combination of rice, layered with meat or vegetables and potatoes, cooked with aromatic spices and garnished with deep fried onions. Making a traditional biryani is a long and complicated process which was beyond my comprehension until my brother who is a wonderful cook, allowed me to watch him produce outstanding results using a very simple process. I came back home after that weekend in Toronto and tried it without the same success.

My brother cooks the chicken on the stovetop, cooks the rice in a rice cooker and pours the chicken and all its juices over the rice and sets the biryani aside until dinnertime. His biryani tastes simply awesome, but I was not able to replicate it.

My way is to cook chicken and potatoes in a big saucepan, cover the top with Greek yogurt, top it with rice that has been soaked and strained well, add chicken broth in proportion to the rice, bring it to a boil and then cover and simmer it over low heat for 25 minutes. It sounds complicated, but is really easy to do. 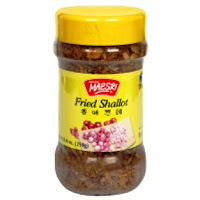 Birista or deep fried onions are an essential garnish for both pulaos and biryanis. They're easy to make but is a tedious and long process. Much easier to pick up a bottle or package of birista at the oriental markets.

The recipe that follows was inspired by the recipe on the back of the spice mix with a few modifications which were made to simplify the process.

Serve this biryani with a simple salad of diced cucumbers, tomatoes, onions, green chilies, salt and lime juice. Or accompany the biryani with one of the following raitas.