Indian markets can now be found in practically every town in Michigan. A Bangladeshi market opened up recently just 3 miles down the road and I found a bottle of kasundi which looked really tempting.

Kasundi is a fiery mustard sauce that originates in West Bengal in India. It is used as a condiment at the Indian table for dipping fried foods and as a sauce for stir-fried spinach. Today I decided to spice up my green beans dish with a dollop of this sauce. Taken on its own, it imparts a pungent flavour of mustard that can make your sinuses flow.

Even though there is no comparison between the two, if kasundi is not available, try substituting with coarse-ground dijon mustard.

Stewed Chicken with Carrots and Potatoes

I made this stew once before, but I left out the yogurt this time and added carrots and potatoes.

I've used Japanese eggplant here, but any variety of eggplant will work as well. The lentils are first cooked until tender, the eggplant cooked separately and the two merged at the end and garnished with ghee, cilantro and green chilies. It's a wholesome side dish which can be accompanied, by chicken, meat, fish or egg curry and served with rice or chapatis.


White  poppy seed (posto in Bengali) is very versatile and can be added to any combination of vegetables. It is especially tasty with cauliflower and peas.

This dish was introduced to me by my sister, Rene, who lives in Toronto in Canada. I specifically remember the evening she made this on one of my visits to Toronto. She had also made Chicken Razala whose leftovers she told me she'd packed for my husband to have when I got back home to Michigan.

At the U.S. border, a female customs official questioned me about what food I was carrying in the car and I told her about the chicken. She asked me to pop the trunk and examined the ice chest, came back to me in a fit of anger and informed me that she could impound my car. Really startled, I asked her what the problem was and she said she found some cauliflower along with the chicken. I told her to take the entire contents of the ice chest and throw everything in the trash, for all I cared. Honestly! Give a woman a little bit of power and she's likely to go bonkers!

This is a simple stir-fried chicken curry with cubed potatoes. It's cooked on the stove-top rather than in a pressure cooker because the chicken cooks quickly in about 20 minutes on a simmer. This dish goes well with hot Basmati/jasmine rice or any Indian bread, accompanied by a dish of lentils or vegetables.

Skinless and boneless chicken thighs come in packages of 12-16 pieces at Sam's Club so I cut each into bite-size pieces, marinate them in ginger & garlic paste, salt, Kashmiri mirch and oil, divide them into 4 separate Ziploc bags and freeze them. The night before cooking a chicken dish, I transfer a bag of marinated chicken from the freezer to the refrigerator so that the chicken is completely thawed. A couple of hours before cooking, I take the package out of the refrigerator and bring it to room temperature on the kitchen counter.

This is a delicious, refreshing dessert that hits the spot on a hot and humid summer day. Mango pulp is easy to make with a ripe mango that is blended with sugar. But, lucky for me, the pulp of alphonso mangoes is available in cans at the Indian market which saves me the time it would take to peel, cube and blend a fresh mango. The mango pulp is sweet enough for me but, if need be, more sugar can be added according to taste.

This soup was so quick and easy to make, it was perfect for lunch served alongside fried dumplings. It tasted just like the miso soup served in Japanese restaurants. Another use for the yellow miso paste that sits in a large tub in our fridge. Thank goodness it lasts in the fridge forever. Notice there is no mention of salt and that's because the miso is quite salty. Adjust salt according to taste.

Agar agar is a gelatin substitute that is used in south-east Asian countries. It is a plant-based extract which makes it a great vegetarian alternative to gelatin which is animal-based. The texture of jello made with agar agar is much firmer than gelatin which I, personally, find addictive.

Kyauk Kyaw made with just coconut milk is supposed to separate into two layers, a transparent layer on the bottom and opaque on the top where the cream settles. I've been experimenting with Kyauk Kyaw for quite a few years and have not been able to create this layered effect. I think it may be because I've always used canned coconut milk instead of fresh. So making two separate layers of mango and coconut milk gives me great satisfaction.

Agar agar is available in strands or powder form. I've used Telephone brand of the powder which is really convenient. For this dessert only 3 teaspoons of the powder was used which was only about a quarter of the packet. It's important to thoroughly dissolve the powdered agar agar in cold water before bringing it to a boil to avoid clumps. The mango layer is made first, poured into the serving dish and allowed to come to room temperature by which time it sets. The coconut layer is then poured over the mango layer to get a two-tiered effect.

Gelatin takes hours to set in the refrigerator. Agar agar sets once it comes to room temperature in less than half an hour and needs refrigeration only to chill. Chilled kyauk kyaw tastes better so make sure to refrigerate it overnight before serving.

The pickled cucumbers served in Vietnamese restaurants taste so good because of their sweet & sour flavour. It's easy to make at home with minimal fuss. These taste great on hamburgers or along with with biryani or fried rice. Salting the cucumber slices before soaking in vinegar keeps them nice and crisp. I made the pickled cucumbers first and had a lot of pickling juices left after eating the cucumbers, so added sliced jalapeno peppers to the brine. Once the heat from the peppers seep into the brine, it can be sprinkled on just about anything for a sweet, tart and spicy tang. The sliced peppers can also be eaten if you can handle the heat.

Directions:
After the cucumbers are eaten, slice jalapeno peppers into the remaining marinade for a sweet chili pickle. Allow the peppers to marinate for at least 2 days for the flavors to develop fully and store in the refrigerator. 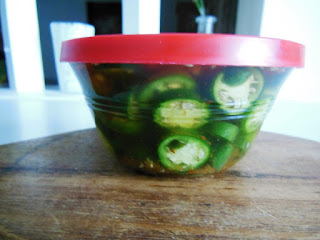 Posted by Chumkie at 9:56 PM No comments:


Malabar spinach or basella is labeled Indian Spinach in the Asian markets. In Bengali, this spinach is called pui shaak and it is one of my favorite vegetables. In this dish the spinach has been stir-fried with shrimp, Japanese eggplant & sweet potatoes with a tempering of Bengali 5-spice or panch phoron seeds. It is seasoned simply with ginger paste and roasted panch phoron powder. For a vegetarian or vegan dish, omit the shrimp.

I first had these spicy Dan Dan noodles at Pei Wei Asian Diner which is a subsidiary of P. F. Chang's China Bistro. Pei Wei Asian Diner fast food joints have popped up in strip malls across Michigan. On their menu, Dan Dan Noodles are described as chile seared soy sauce, minced chicken, scallions, garlic, bean sprouts, cucumbers, egg noodles and has become a favorite of mine because it's one of their few spicy dishes.
Shirataki or miracles noodles are "Largely composed of water and glucomannan, a water-soluble dietary fiber, they are very low in carbohydrates and calories, and have little flavor of their own", according to Wikipedia. These noodles are a perfect alternative to regular pasta for those of us who are watching our carbohydrate intake.
Any and all vegetables left in your fridge can be tossed into this dish which can also be customized to the level of heat to which you are accustomed. When this is made for children, feel free to omit all the spicy elements and add them back at the table based on individual preference.
I've used minced meat, but vegetarians and vegans may substitute tofu for meat. 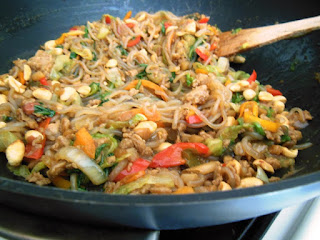 Pomfret reminds me of our stay in Bombay (now known as Mumbai). At the time we lived there in the mid '70s, river fish like those found in Kolkata (formerly Calcutta) were hard to come by. It was a huge adjustment to switch to ocean fish among which pomfret was the most palatable. The fishy aroma can be toned down by marinating pomfret in garlic paste.


When the body craves simple yet nourishing fare, this stewed chicken comes to mind. Quick & easy to prepare with minimal fuss, it is one of the rare occasions when I leave the skin on the chicken legs to be discarded just prior to eating. It's made with very few ingredients and yet is deeply satisfying with plain, white rice.

To serve this to children simply omit the green chilies so it's not too spicy for them to enjoy. Add carrots, potatoes and green peas for a traditional stew. The chicken legs should be cooked until the meat falls off the bone.