This dish was inspired by Ishani Ghosh Majumdar's recipe posted on Kitchen Raagas group in Facebook.

I have also made this same recipe using tilapia fillets.

Catfish Steaks in Fennel Seed Sauce uses the very same ingredients with just a few differences.  The gravy is much thicker in this dish and I've used climbing perch here instead of catfish.

This fish, also known as Koi Maach in Bengali, is purchased live in India and is well-known for its recuperative qualities. In the U.S. and in Michigan in particular, we have no option but to buy frozen climbing perch which is sometimes available in some Oriental and Indian grocery stores. Although the flavour of the live fish is far superior to the frozen variety, it is still a good alternative to using other species of fish, such as catfish or tilapia.

Fennel seed powder is made by toasting fennel seeds in a dry skillet until their aroma is released, taking care not to brown them. Once cooled, the fennel seeds are ground to a fine powder in a coffee grinder that has been reserved specifically for grinding spices.

After each use, the spice grinder is whirred with baking powder to clean it and remove all aromas.

Directions:
1.  Wash fish well and make two slanted slits on each side of each fish between the head and tail. This allows the sauce to penetrate to the center.
2.  Apply salt & turmeric to fish and marinate for half an hour.
3.  Make a paste with 1 tsp. oil, ginger paste, salt, Kashmiri mirch & 2 Tbsp. fennel powder.
4.  Stir remaining 1 Tbsp. fennel powder and sugar with 2 Tbsp. water and set aside.
5.  In a skillet over medium-high heat, fry fish in oil on both sides and set aside.
6.  In the same oil, fry fennel seeds until they sputter, then add the tomatoes.
7.  Cook tomatoes with 1st batch of fennel seed paste until tomatoes break down.
8.  Add a cup of boiling water in 4 batches, stirring well after each addition.
9.  Adjust salt to taste, add fried fish, cover and cook for 5 minutes.
10. Turn fish over and cook for another 5 minutes.
11. Add 2nd batch of fennel seed paste and stir gravy gently without disturbing the fish.
12. Garnish with cilantro & green chilies and serve with steamed Basmati rice.

Fish in mustard sauce is a very popular Bengali dish which is usually made with a paste of black mustard seeds that have to be soaked in water and salt overnight to remove their bitterness. Here is a very quick, easy and delicious alternative using Coleman's Mustard powder.

This recipe was given to me by my niece, Dipanwita Banerjee, who is an excellent cook!

Directions:
1. Marinate fish pieces in salt and turmeric for half an hour.
2. Heat oil in a pan, sizzle nigella seeds and fry jalapeno pepper & onions for a minute.
3. Stir in tomato paste & chili powder and cook until oil resurfaces.
4. Place fish pieces over onions, cook one side, turn fish pieces over and cook other side.
5. Give mustard & water a good stir and pour over fish.
6. When gravy comes to a boil, garnish with green chilies and cilantro.
7. Serve on a bed of hot Basmati rice.
Posted by Chumkie at 11:11 PM No comments: 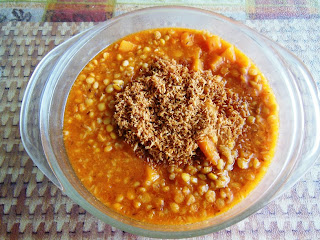 Mum used to make this at home when company was expected. It was part of a feast (nimonthonno ranna in Bengali). Fresh coconuts are readily available in India and Mum would break the coconut shell, slice the meat into strips and slice it into flat disks that would be fried in oil to a nutty brown.  They would then be cooked along with the lentils.

Since fresh coconuts are not as easily available in Michigan, a staple in my refrigerator is unsweetened, grated coconut. I use a dry skillet to toast a quarter cup of grated coconut to a golden brown colour with the help of 1/2 a teaspoon of sugar. The toasted coconut is used as a garnish and stirred into the lentils just prior to serving.

1. Wash and soak sweet potatoes in water to prevent discolouring.
2. Wash lentils until water runs clear and soak in hot water for half an hour.
3. Heat oil in a pan and add cumin seeds & garam masala.
4. When cumin seeds start to sizzle, add tomato and ginger pastes along with sweet potatoes and cook for a few minutes.
5. Add lentils, cover and simmer for about half an hour until lentils are tender.
6. Adjust salt to taste, garnish with ghee, toasted coconut and whole green chilies.
7. Transfer to a serving dish and serve with steamed rice or tortillas.

I shared this recipe on

2.  Fry eggs in 1 Tbsp. oil, cut side down, until golden brown and set aside.

3.  Blanch onions & garlic in a cup of boiling water and drain.

5.  Heat remaining 3 Tbsp. oil in a skillet over medium-high heat.

8.  Heat chicken broth in microwave and pour into skillet.

9.  Add potatoes & eggs, cover and cook until gravy is reduced by half.

11. Serve over hot steamed rice or with chapatis.
Posted by Chumkie at 12:14 AM 2 comments: 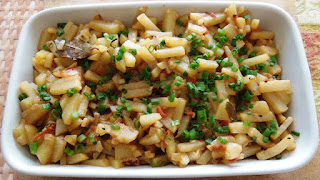 Chayote squash is also known as choko or Darjeeling squash and may be replaced with zucchini or bottle gourd. Select light green chayote squash which indicate they're still young and sweet.

Directions:
Serve with rice or chapatis.

I shared this recipe on

Posted by Chumkie at 2:52 PM No comments: