Mum's Yakhni Pulao made with mutton or lamb was unforgettable. It was quite a complicated recipe, but unfortunately, there is no record it. I've tried to reproduce it to the best of my ability, and this attempt tasted quite delicious.

My pressure cooker came in handy to pre-cook the pieces of meat, but this step could also be done on the stove top. It would just take an hour or longer instead of 20 minutes in the pressure cooker.

Shan pulao/biryani masala mix, available in Indian markets, contains a mix of spices that give biryani its distinctive taste and aroma. I used a tea strainer to sprinkle the spices over a plate. That leaves all the solid spices in the strainer which I use for tempering, remove from the oil and enclose them in a tea ball (or cheescloth tied with kitchen string is a good substitute) which is tossed into the saucepan to cook along with the biryani.

Birista or deep fried onions are an essential garnish for both pulaos and biryanis. They're easy to make but is a tedious and long process. Much easier to pick up a bottle or package of birista at the Asian markets.


Biryani is pretty filling as a main course, but is great paired with a raita or simple salad. The grated fuji apple raita on the left is dressed with yogurt and a tempering of raisins, mustard seeds and curry leaves. On the right, a simple salad of cucumber, tomatoes and onion is dressed very simply with salt and lime juice.

Stir-Fried Chicken On a Bed of Kale & Spinach

An interesting twist on our Indian Saag Chicken, I replaced the Indian ingredients with Chinese sauces to come up with this delicious dish.

This recipe is a great way to use the one pound packages of triple-washed baby spinach and kale that we get from the membership markets. 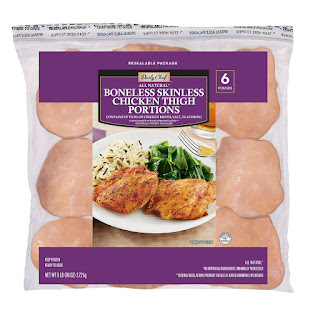 Skinless and boneless chicken thighs come in 6 lb. packages at the membership stores. I chop the thighs into bite-sized pieces, hand-mix them with ginger-garlic paste, paprika (Kashmiri mirch), salt and oil, divide them among 4 Ziploc bags and freeze until ready to be cooked. Soaked in a bowl of tap water, the frozen bags thaw and come to room temperature within half an hour.

I've used this marinated chicken in Indian and Asian dishes with great results.

Another favourite at Chinese restaurants, this eggplant dish is simple to make at home.

In my opinion, Japanese eggplants are sweeter and tastier than other varieties and are now available at all supermarkets.

The ingredient list is short and should be available locally. The oyster sauce is salty, so do a taste-test before adding more salt.

Vegetarians and vegans can substitute diced tofu for minced chicken and mushroom sauce for oyster sauce.