It's been a very exciting month for two reasons. First of all, two sisters who live in India are visiting family in Toronto, Canada and they, along with two brothers and our eldest sister-in-law, drove down to Windsor for lunch. My son who also lives in Toronto was visiting us here in Michigan, so we all met in Windsor at a Chinese restaurant. It was so nice to see my two sisters after 23 years.


A school-mate with whom we reconnected as an alumni group on Whatsapp vacationed here with her son, who lives less than five miles away. It turns out her husband was born and spent his childhood in Pegu, Burma. It was an enormous pleasure to have them over for a Khaukswe meal and I also made Kyauk Kyaw, a coconut jelly, for dessert.

There are three parts to the khaukswe recipe of which the soup is the most complex. However, most of the components for this dish are available on supermarket shelves which makes life so much simpler. No longer do we have to scrape the meat out of the coconut and extract the milk, because coconut milk is now available in cans. Deep fried onions or shallots are imported from Holland, and deep fried garlic from Thailand.

The second component, fresh egg noodles, are available at Asian markets and come bundled in packages and simply need to be blanched in boiling water and strained. A touch of oil added after they are taken out of the boiling water prevents them from sticking together. 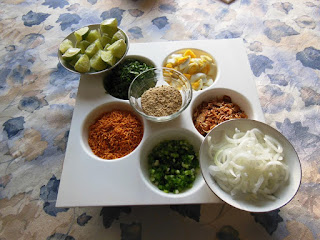 Read more »
Posted by Chumkie at 3:17 PM No comments: Links to this post