Shrimp and mustard gravy go well with a lot of vegetables such as eggplants, potatoes, pumpkin, summer squash or sweet potatoes.  Asparagus provides a crisp note when combined with shrimp and ground mustard.

This dish is usually made with small, whole eggplants, but works just as well with oriental eggplants.  The original recipe is on a Facebook group page called Kitchen Raagas.  I've reproduced the recipe the way I made it here for people who are not on Facebook.

1. Dry roast separately, chana dal, peanuts, and sesame seed.  Mix together and set aside.
2. Heat olive oil in a sauce pan over medium heat.  Fry eggplants till golden and set aside.
3. Make a paste of onion, garlic, ginger and tomato.
4. Heat olive oil and fry paste until oil resurfaces.
5. Add roasted powder, eggplants, coconut, tamarind paste and curry leaves to the saucepan and stir well.
6. Allow to simmer for 10-15 minutes.
7. Garnish with ghee and serve.
Posted by Chumkie at 8:58 PM No comments:

Festive Bengali meals end on a sweet note, usually a chutney of which Tomato Date Chutney is the most common. 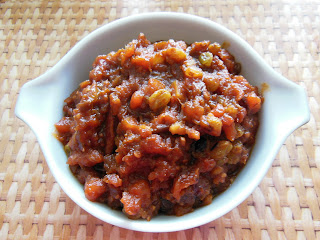 Directions:
* Panch phoron is a Bengali 5-spice mixture which comprises the following seeds in equal proportions:
This recipe was shared on

Posted by Chumkie at 2:47 PM No comments: