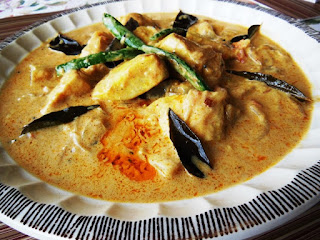 Use any white fish steaks or pieces in this delicious coconut milk gravy which tastes best served on a bed of steamed Basmati rice. I've used catfish, rock cod and telapia fish, all with excellent results.

Freshly grated coconut tied in muslin cloth and squeezed to extract the milk works the best, but in the Western hemisphere, canned coconut milk is most readily available and makes a good substitute for fresh coconut. If coconut milk is not available, unsweetened evaporated (not condensed) milk can be used as a substitute.

This same process can also be used with chicken legs and thighs for another variation of malai curry, which is also true for shrimp, which is especially delectable.

The fish I used today came from a membership supermarket (Costco/Sam's Club) in a 3 lb. fresh pack. I sliced them up, divided them between 3 Ziploc bags, seasoned them with turmeric powder and salt and froze them for later use. Thawed in the sink, it makes life much easier when it comes time to cook.

Thanks for stopping by. I love to hear from all of you, so please feel free to leave a comment.

If you have a question I will reply to your comment. If you prefer an email response, please mention that and make sure your blogger profile is linked to your e-mail, otherwise I will not be able to e-mail you back.

Please note that any and all comments posted by 'Anonymous' persons are deleted without exception as a means of nuisance abatement.

Thanks so much for reading and commenting on this post.